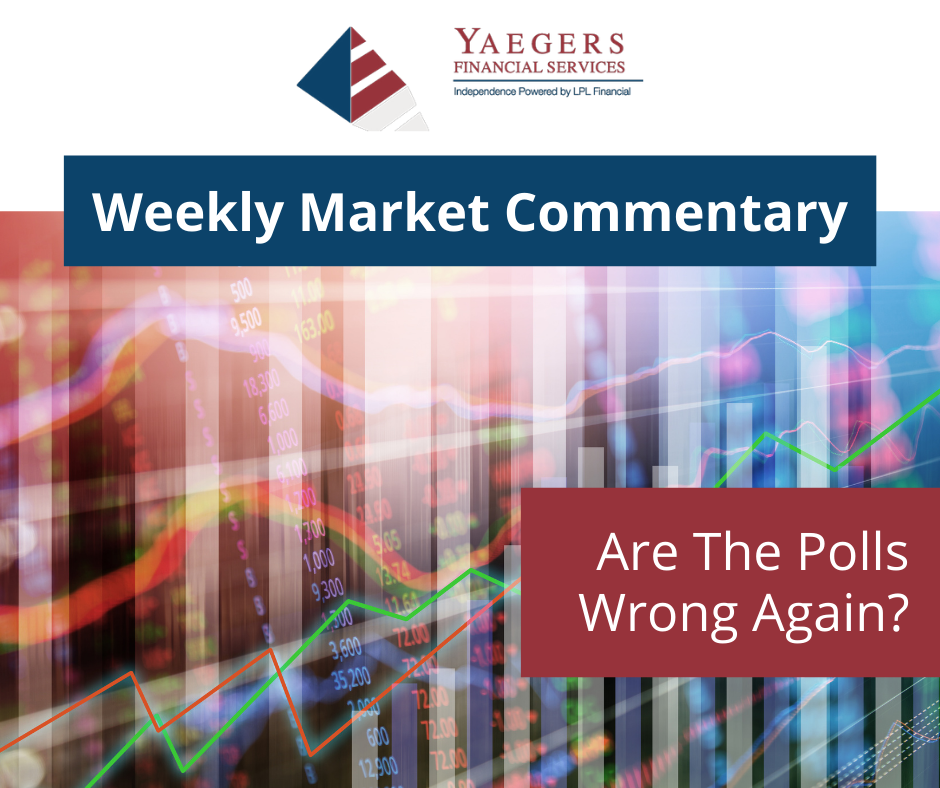 Are The Polls Wrong Again?

The race for the White House is down to the homestretch, and although presidential candidate Joe Biden is comfortably ahead in the election polls, various market and economic-based indicators suggest the election may be much closer than many are expecting.

Support For A Biden Victory

Various polls show former Vice President Joe Biden comfortably in the lead in the 2020 presidential race, although in some battleground states the race appears to be quickly tightening. Influential states like Ohio and Pennsylvania may even be a coin toss at this point.

Not surprisingly, approval ratings can play a large part in forecasting the overall percentage of the votes in an election. Only two presidents have lost reelections since the Great Depression: George H. W. Bush and Jimmy Carter. Not surprisingly, both had low approval ratings leading up to the elections. If the people don’t approve of the job you’re doing, you may not serve a second term.

Recent Gallup polls suggest that President Donald Trump’s approval rating is 43%. Using a regression of previous elections, this equates to less than half of the two-party vote [Figure 1]. Of course, Trump received less than half of the popular vote in 2016, but he still won the election because he had more than 270 votes in the Electoral College. Still, the polls currently favor Biden, and this appears to be his race to lose. 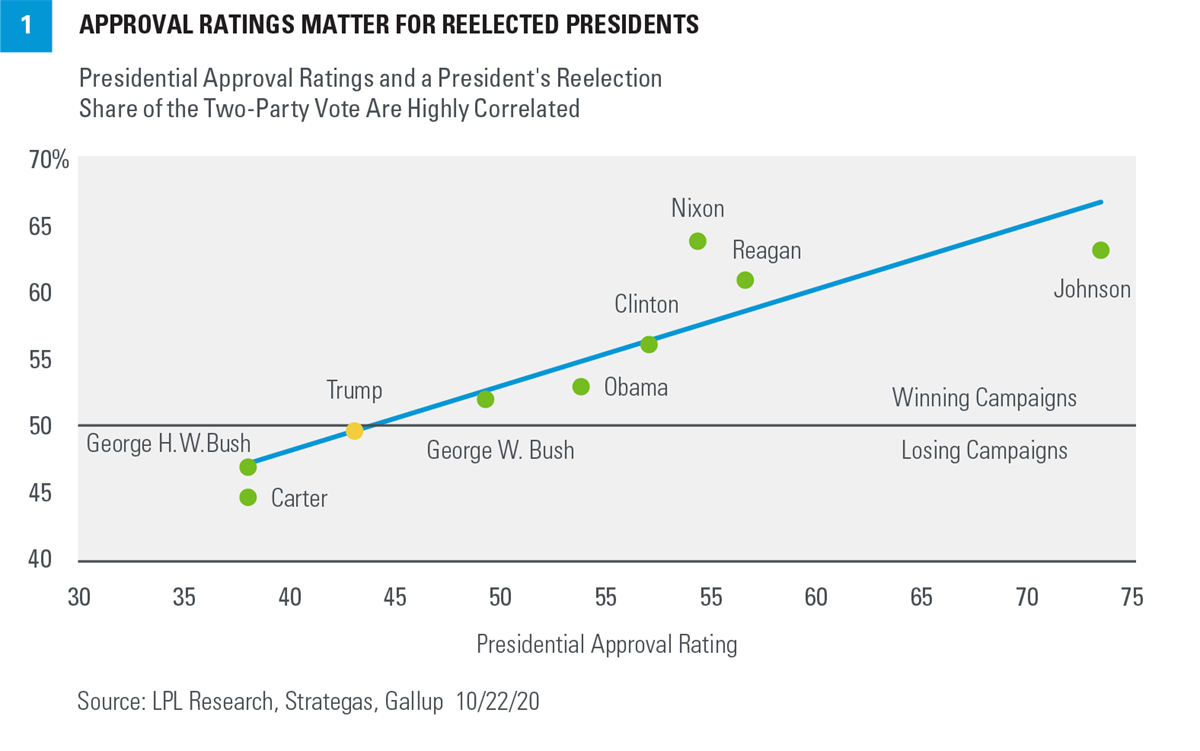 How well specific “Biden stocks” have done could be another clue that a Biden victory may be around the corner. Our friends at Strategas Research Partners created a basket of stocks likely to benefit from either a Trump or Biden presidency, and the Biden portfolio has done extremely well lately. Areas like green energy and solar have experienced huge moves before this election, while defense companies and financials—considered friendly to Trump—have not performed as well.

Clues it May be Closer Than the Polls Suggest

The majority of Washington insiders we track think Biden has at least a 60% chance of winning this election, with many thinking the odds are much higher. However, there’s a good chance things could be much closer, and here’s why.

As we mentioned above, if the economy is in a recession before the election, reelection odds decline, while here we are demonstrating that a strong economy right before an election is good. This sums up 2020—things are just really confusing! 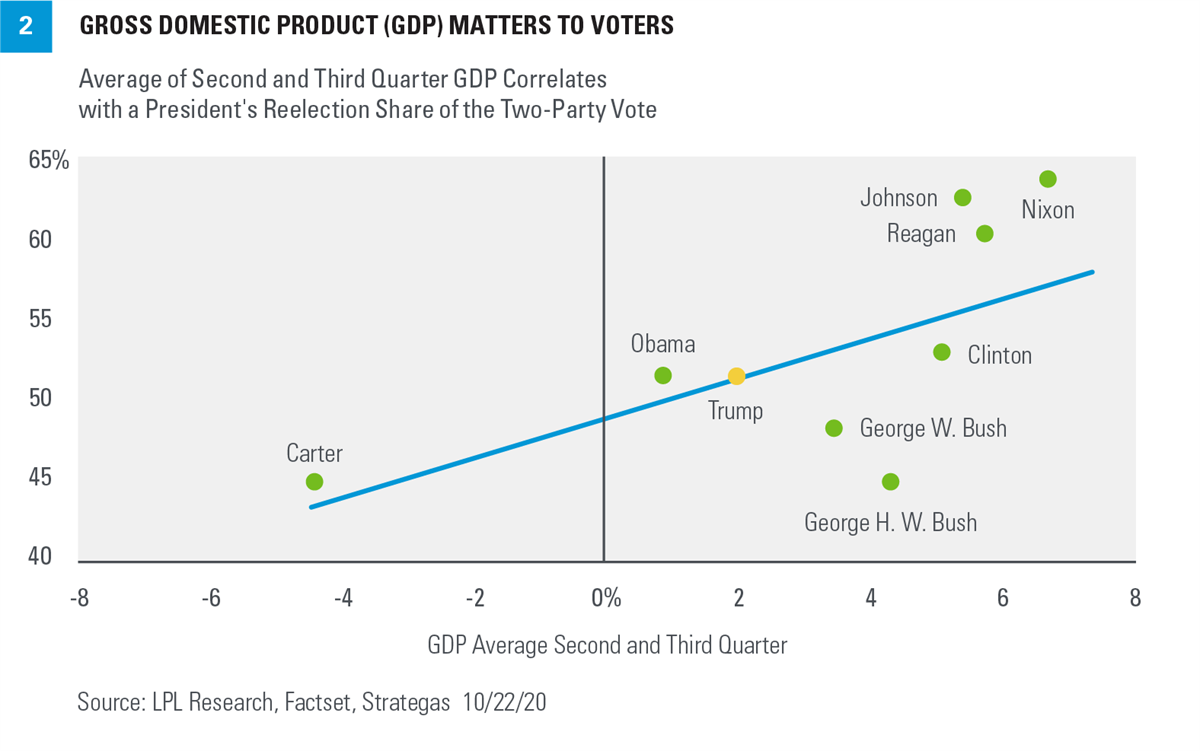 The issue with this analysis for the current election is that the CARES Act included stimulus checks to many Americans, as well as enhanced unemployment insurance, which have inflated incomes despite the high unemployment rate. We would put this signal in the favor of Trump, but with an asterisk next to it.

What makes 2020 so unique is some believe that Biden’s policies, such as more regulation, higher taxes, and reduced tariffs, may weaken the US dollar, putting the accuracy of this signal in question.

While Biden may be ahead in the polls, there are several clues that this race could be much closer than many are expecting. This could influence the makeup of Congress as well, where a close race may suggest a greater chance of divided government. Ultimately, we the people determine which signals are right this time around, so get out there and vote!

This material is for general information only and is not intended to provide specific advice or recommendations for any individual. There is no assurance that the views or strategies discussed are suitable for all investors or will yield positive outcomes. Investing involves risks including possible loss of principal. Any economic forecasts set forth may not develop as predicted and are subject to change.

References to markets, asset classes, and sectors are generally regarding the corresponding market index. Indexes are unmanaged statistical composites and cannot be invested into directly. Index performance is not indicative of the performance of any investment and do not reflect fees, expenses, or sales charges. All performance referenced is historical and is no guarantee of future results.

Any company names noted herein are for educational purposes only and not an indication of trading intent or a solicitation of their products or services. LPL Financial doesn’t provide research on individual equities.

All information is believed to be from reliable sources; however, LPL Financial makes no representation as to its completeness or accuracy.

The Standard & Poor’s 500 Index (S&P500) is a capitalization-weighted index of 500 stocks designed to measure performance of the broad domestic economy through changes in the aggregate market value of 500 stocks representing all major industries.

The PE ratio (price-to-earnings ratio) is a measure of the price paid for a share relative to the annual net income or profit earned by the firm per share. It is a financial ratio used for valuation: a higher PE ratio means that investors are paying more for each unit of net income, so the stock is more expensive compared to one with lower PE ratio.

Earnings per share (EPS) is the portion of a company’s profit allocated to each outstanding share of common stock. EPS serves as an indicator of a company’s profitability. Earnings per share is generally considered to be the single most important variable in determining a share’s price. It is also a major component used to calculate the price-to-earnings valuation ratio.

All index data from FactSet.

Please read the full Midyear Outlook 2020: The Trail to Recovery publication for additional description and disclosure.

This research material has been prepared by LPL Financial LLC.